Gnosticism, one of the most fascinating and perplexing phenomena in Western religious history 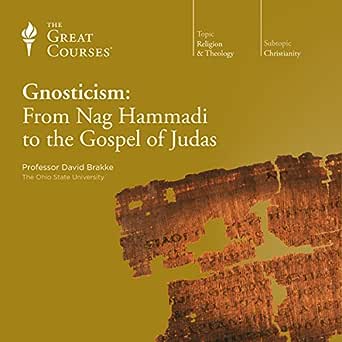 Check it out: Gnosticism – From Nag Hammadi to the Gospel of Judas

Gnosticism, one of the most fascinating and perplexing phenomena in Western religious history, sparked religious ideologies that competed with many other religions of the time, including the theological thinking that came to define Christianity. And, though the emerging Orthodox Church eventually condemned Gnosticism as heretical, the church formed many of its most central doctrines (such as original sin, the Immaculate Conception, and even the concept of heresy) in response to Gnostic ideas.

This fascinating 24-lecture course is a richly detailed guide to the theology, sacred writings, rituals, and outstanding human figures of the Gnostic movements. What we call “Gnosticism” comprised a number of related religious ideologies and movements, all of which sought “gnosis,” or immediate, direct, and intimate knowledge of God. The Gnostics had many scriptures, but unlike the holy texts of other religions, Gnostic scriptures were often modified over time. Gnostic cosmology was extraordinarily intricate and multidimensional, but religious myth was simply a means to the ultimate end of gnosis.

Follow Gnostic ideology and its vivid impact on Western thought through the centuries, from its role in early religions and its re-emergence in medieval spirituality to its remarkable traces in modern popular culture, from science fiction novels like Blade Runner to Hollywood films like The Matrix. In delving into the paths of gnosis, you’ll discover a compelling, alternative current of religious practice in the West, and reveal Gnostic influence resonating in Western spirituality even in the present day.

There are no reviews yet.

Get all the latest information on Events, Sales and Offers.

You've just added this product to the cart:
X Close
0